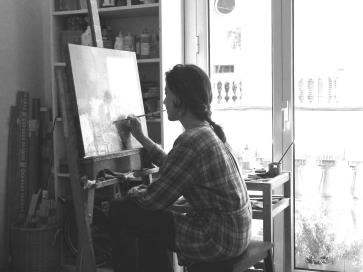 Begins to receive artistic training from an early age in workshops and academies in Madrid including Nieves Solana and Maribel Fraguas.

At the age of 18th she travels to Indianapolis (USA) where she receives art classes at the Lawrence Central High School which she represents in Senior ategory for the “500 Festival of the Arts” contest and gets the first place.

She graduates with honors at the Complutense University of Fine Arts in Madrid.

In the summer of 1996 she attends the landscape scholarship of Ayllón (Segovia) directed by the sculptor Pedro Terrón, where she enjoys the freedom regime.

Proposed by the landscape professor of Fine Arts University, Don José Carralero, she obtains the prestigious painting grant from the Rodríguez Acosta Foundation of Granada.

That same year she won several awards, among them the “Pèbeo Art Contest” with her companions Marian Perez and Iván Solbes, with whom she planned and made an installation in Marseille and a cultural trip to New York.

The Spanish embassy in Belgrade through the mediation of the cultural ambassador Javier Hergueta, welcomes her three times to develop her work inspired by the city and its surroundings and finally these trips have their fruit in a solo exhibition at the Jugoslavenska Galerija Umetnickih Dela in 2002.

At the age of 29 she moves to Barcelona where she collaborates with the Jordi Barnadas gallery in several solo and collective exhibitions.

Thanks to Andrés Moll, the owner of the Galeria Artara of Mahón, she gets to know the island of Menorca, a source of inspiration in many of her paintings.

The Anquin´s Gallery is her main agent in international fairs.

She currently collaborates on many of the projects of Jorge Alcolea´s Gallerie.

So far, she is developing her work with total freedom and confidence.